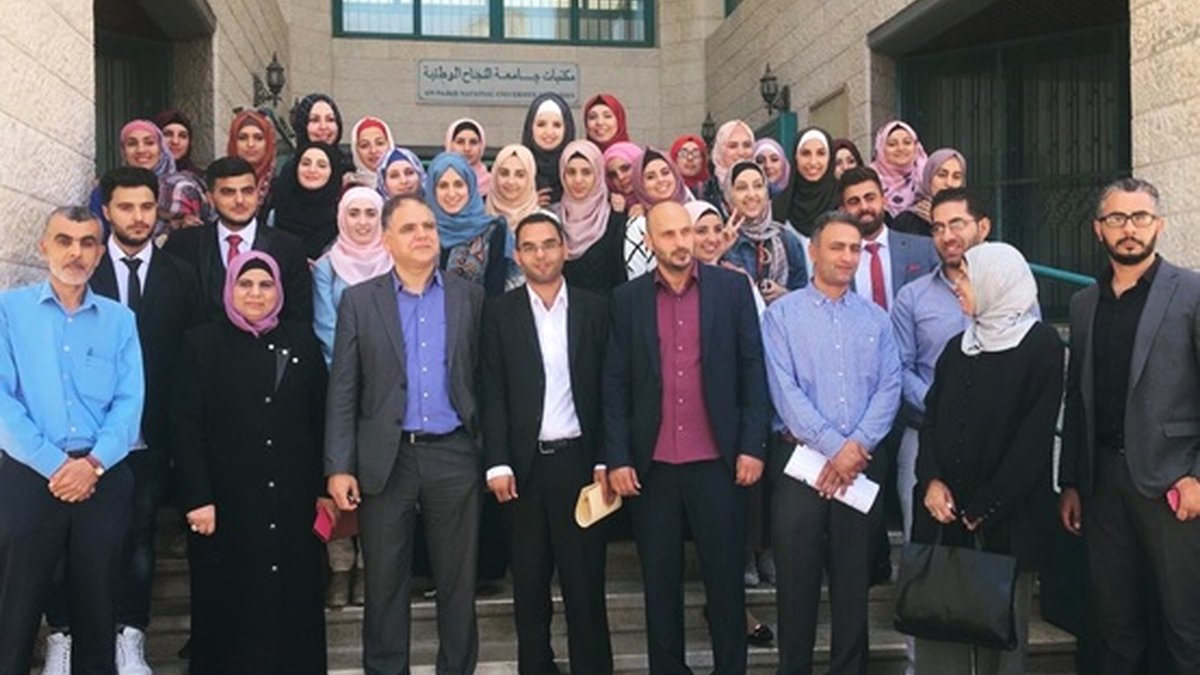 On the 25th of May, the Department of English held seminars for the second semester graduates for the year 2016/2017. The graduation projects tackled a plethora of topics that ranged from English literature, language, translation, and education. Forty three students have presented their projects either in teams or individually. Six seminars commenced at 9:00 a.m., introducing groups of students who were to be examined by a committee of two examiners.

The first seminar conducted included Dr. Bilal Hamamra’s supervisees who were examined by Dr. Mohammad Hamdan and Dr. Ahmad Qabaha.  Sanaa Abusamra's  project – “The Specters of Nation and Narration in Mahmoud Darwish’s Absent Presence” –  is a Derridean, Barthesian reading of Mahmoud Darwish’s self-eulogy Absent Presence. The paper tried to deconstruct some of the stereotypical thoughts on specters using Derrida’s concepts. Moreover, Sanna investigated interrelated connections between the Palestinian trauma and the literary theories posited by Derrida and Barthes. The second group included Alaa Shetyah, Iman Dodin, Jumana Fathallah, and Rawand Hindi. Their work is titled “The Colonization of the Female Body in Liana Badr's The Eye of the Mirror” in which they focused on the suffering of Palestinians in general and women in particular during Tal Al-Zatar war in 1975-76. They argued that Badr's The Eye of the Mirror is a depiction of the trauma of the Palestinians who lived in Lebanon as enacted in the figure of Aisha who is always repressed by her surrounding society. They  also shed light on a variety of substantial topics like romance, enforced marriage, projection and narration. The third group included Haya Hussein whose paper was in the field of translation entitled “ A Translation of ‘A House with Mirror’ ”.

Dr. Bilal Hamamra and Dr. Rami Qawariq examined Dr. Abdel Kareem Daraghmeh's supervisees who worked on various projects addressing different subjects. The first group members , Feryal Atout, Nadeen Shubita, and Nadia Dweakat, presented their project titled “Wedded to Words”, which is a biography written in a creative style for the Palestinian writer Ziad Khaddash. The project covered different stages of his life along with highlighting his educational and literary career. The second group consisting of Rami Sbeihat, Mahmoud Assi and Moath Mutaei translated Anton Chekhov's “The Kiss” into Arabic and submitted a reflection paper on the challenges they faced like syntactic, semantic and idiomatic problems.

The other two group's works who have been also examined by Dr. Hamamra and Dr. Qawariq worked on projects in the field of education. Ruqaya Fatayer, Aya Anaya, and Maha Kayed addressed the idea of using games in teaching in their project titled “New Lens to Teaching Grammar: Designing Digital Games to Fill the Gaps in Eighth Grade English for Palestine Curriculum” where they analyzed the curriculum and found some gaps in the grammar; hence, they designed two games to fill these gaps. The other group which consisted of Salam Dweakat, Rawan Salkhi, and Ansam Sawalha worked on a project titled “Using Games in Teaching Grammar for the Third Grade”.

The third seminar conducted was with Dr. Sufyan Abuarrah’s supervisees. Two groups were examined by Dr. Sameer al-Issa and Miss Hiba Yaseen. The first group included Abeer Shraim and Ruba Sameer whose work is on translation. Their project is entitled “Implicature in Translation from Arabic into English: A Case Study of ‘ My Family and Other Animals’ ”.  The Second group consisted of Rawan Rawajbah, Lara Yaseen, and Aseel Isa whose paper is in the field of education. It is “A comparative Study of the Previous and Current First Grade English Language Curricula in Palestine”, which deals with the main differences between the two curricula along with the criteria used for constructing them. Results were that the current one is better.

The fifth seminar conducted was with Dr. Nabil Alawi’s students. Two groups were examined by Dr. Sufyan Abuarrah and Dr. Abdelkarim Daragmeh. The first group was Shorouq Najjar, Sana Qazmouz, Bara'a Fuqha, and Netham Ayyash in which they translated the first three chapters of Mohammad Al-ghrram's " ولتصنع على عيني” from Arabic into English. Moreover, they wrote  a reflection paper on the syntactic, semantic as well as intertextual problems they  encountered while translating.

Students' projects which were conducted under the supervision of Dr. Ekrema Shehab were examined by Dr. Sufyan Abuarrah and Dr. Abdel karim Daragmeh. Both groups translated literary works into Arabic and handed a reflection paper on the challenges faced. Samah Mahamdeh, Dima Jarrar, Laila Surakji and Sima Atallah translated Thomas Wolfe's short story “The Child by Tiger”. Whereas, the other translation was conducted by Rawan Alamieh, Sara Anter and Ghalia Masri, who translated Washington Irving's “Rip Van Winkle”, and in their reflection paper, several examples of challenges were classified into: syntactic, semantic, pragmatic and cultural problems. All these examples were thoroughly analyzed and discussed.

In these six seminars, students presented their graduation projects, on which they worked their fingers to the bone, with great zeal and enthusiasm. They bade farewell to their professors and colleagues as the day was the end of their four-year journey in the Department of English and the beginning of a new chapter pursuing their future careers and postgraduate studies. On behalf of the English Department, we congratulate all graduates and wish them the best in all their endeavors.

Your browser is out-of-date!